Another of my favorite situations in bird photography is the silhouette – that is photographing a subject against the light, rendering it as a fully black shape, and usually surrounded by beautiful golden orange hues.  It is not something that is often thought about in the field as we are mostly wanting the sun directly behind our back to light up our beautiful subjects in front of us.  When the sun is low to the horizon, train yourself to give a peek behind you, or actively search for silhouette opportunities. 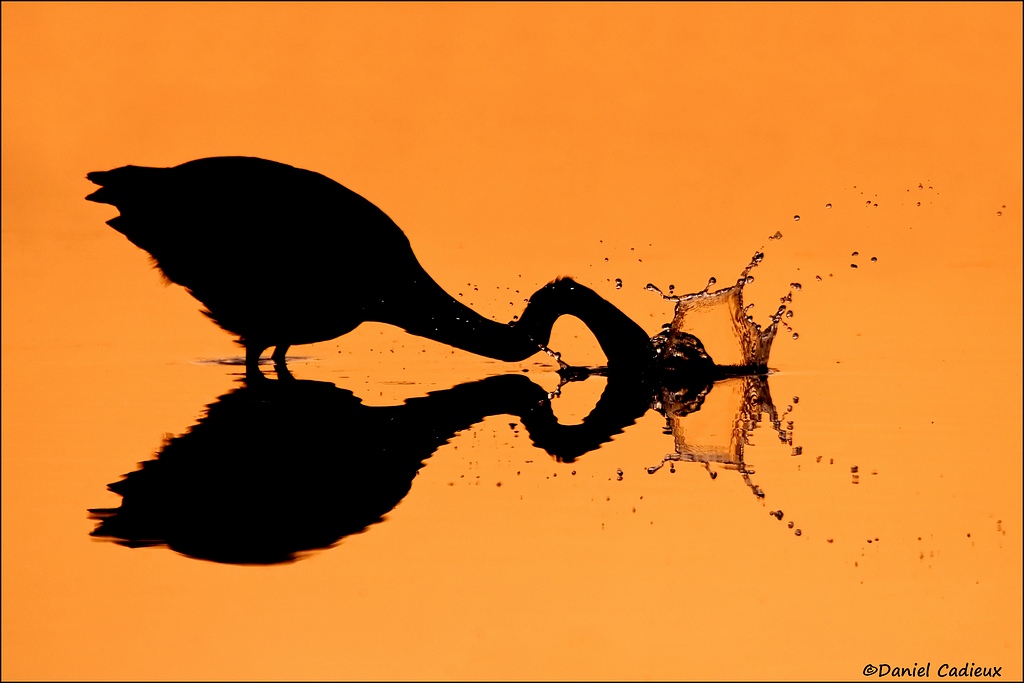 When I first approached the heron above it was from the typical sun-behind-me angle.  The problem was the very ugly man-made structure and some not-too-pretty weeds and other objects behind it.  Thankfully the sun was just breaking out of the horizon and I had the presence of mind to decide to walk around it and face the sun in hopes of silhouettes.  What resulted was beautiful orange waters in clean surroundings, plus the heron beginning to fish for minnows – giving me some way cool splashing and reflections.  Of course not every opportunity will be as lucky as this one was, but had I not thought of silhouettes I never would have had these chances.

Silhouettes are pretty easy to expose.  Dial down the exposure until either (or both) of these occur:  the subject is solid black, or the background brightness is toned down, even if the subject is not fully, but still almost all black.  One advantage of shooting for silhouettes is the faster shutter speeds offered by pointing towards the light, so stopping down is not a problem.  If a few details still show when processing the image, a simple tweak of the “blacks” or “shadows” sliders to render those darker is all that is needed to complete the fully filled shape desired. 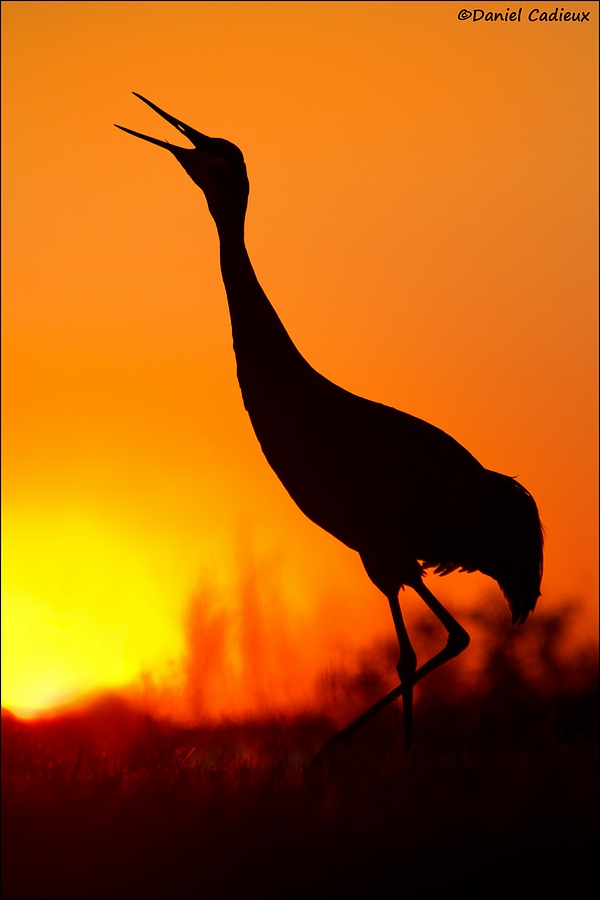 Distinctively shaped species are the best to photograph as silhouettes – they are instantly recognizable despite being a big black shape.  One of the most important things to keep in mind is the overall pose of your subject – bill angle is very crucial as a bird looking directly towards the camera will have no bill showing, ending up with only a round head and removing one of its key visual marks in the process.  You will want most of the bill’s length showing, therefor a mostly parallel to the camera head angle is most always best.  Good leg separation is also a good thing to have as it can be hard to distinguish which leg is which as they merge together. 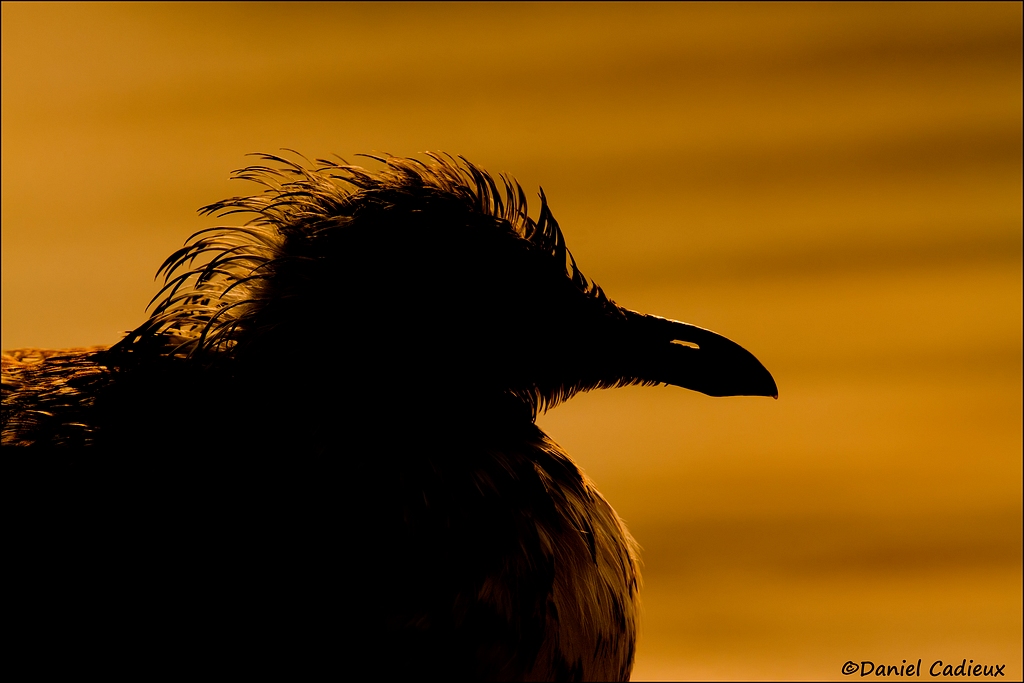 Despite the lower light of most silhouetted images, note the relatively high shutter speed I was able to obtain in images above.  For the image above I deliberately positioned myself to be aligned with the best patch and most vibrant of water.  On-the-spot adaptation for the situation, and recognizing the elements surrounding it, made for better photographs in the end.

Speaking gulls, here’s another to close off this blog post.  It was a disappointingly quiet morning during fall shorebird migration when I turned around, and low and behold a lone young Ring-billed Gull, bathing and flapping in the water just waiting there to have its picture taken in silhouette against the sunlight.  I could have walked away from the gull, as most would do, and gone elsewhere, but recognizing the artistic merits of the opportunity in front of me gave me some good images of a much ignored species to come home with to process. 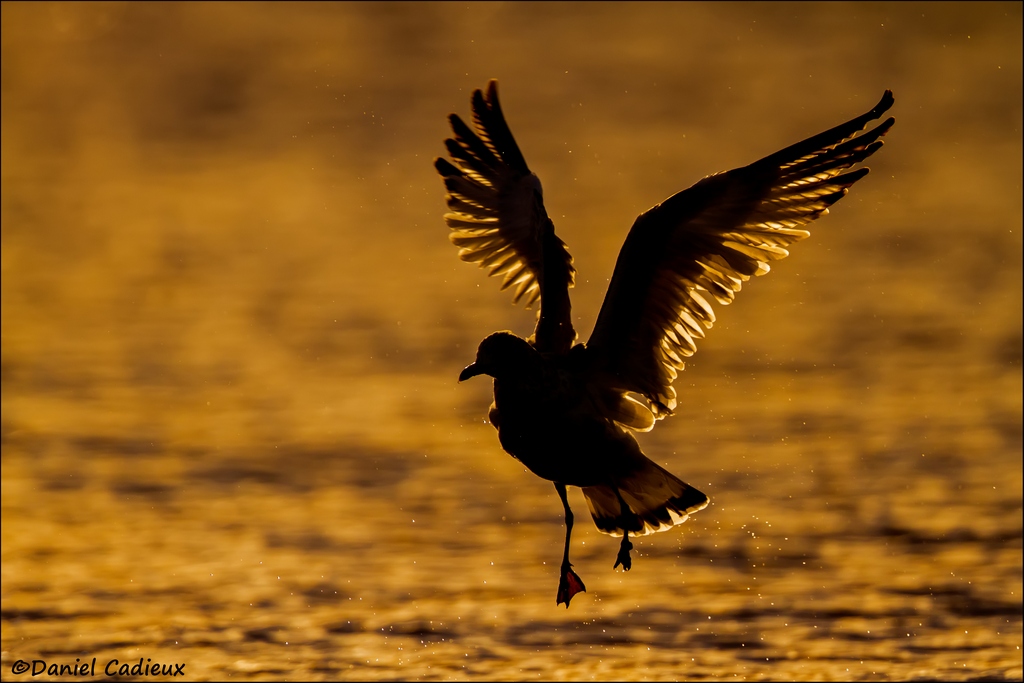 Try it out next time you come across gull action in a backlit situation…you may find yourself surprised at how fun and productive it can be!