The Story Behind the Image 3 – Pollen Covered Bee On Crocus

Whenever I am home and step outside the door I almost always look for macro subjects to photograph – especially during the non-winter months.  On a cold and windy early April day I did so as usual, but still being very early spring my hopes were not that high, apart from plants beginning to sprout.  The earliest flowers to bloom on my yard are the crocuses.  They start blooming when there is still snow on the ground.  Checking them out closely for potentially appealing petal/pistil/stem lines and curves I stuck my 100mm f/2.8 macro lens in them at just about 1:1 magnification and began to look for interesting compositions.

To my surprise, after a few minutes of exploring the crocuses and still looking closely at one of them through my camera’s viewfinder, a bee slowly started to creep out from inside of it!  It was still seemingly semi-dormant as the temperature was just a few degrees short of the freezing mark, plus the wind was a very cold one too.  As an added bonus the bee was covered with pollen…a dream macro shot right in front of my eyes, right at my doorstep.  It was going nowhere fast, so I kept my lens pointed on it, focussed…and failed miserably as the wind was just too strong to keep the flower still.  I tried shielding the wind with my body, then with a cut out box, still no luck.  Anytime the wind let down it picked up just as I pressed the shutter button.  I could not believe it, the most cooperative pollen-covered bee ever, and just too windy to take advantage of it.  The neighbours must have wondered what was going on as I lay down flat and motionless on my belly in my still half-snow-covered flower bed, but I just did not care…I wanted that bee picture.

Unbeknownst to me, my older son, 11 at the time, was watching me “work” through the living room window.  Me lying there for the longest time had him curious so he proceeded to head outside and ask questions.  I showed him the bee inside the crocus, and we both marveled and studied it for a bit as it was still only barely moving.  Then it dawned on me:  I have a perfectly willing helper right there with me!  I asked my son if he wanted to hold the flower for me to prevent it from briskly swaying in the wind.  He was only too proud to oblige, lying on the ground next to me holding the flower still.  Now the neighbours must really have wondered what was going on now that my boy had joined me in lying on his belly, motionless, in the flower bed, but I just did not care…I got that bee picture. 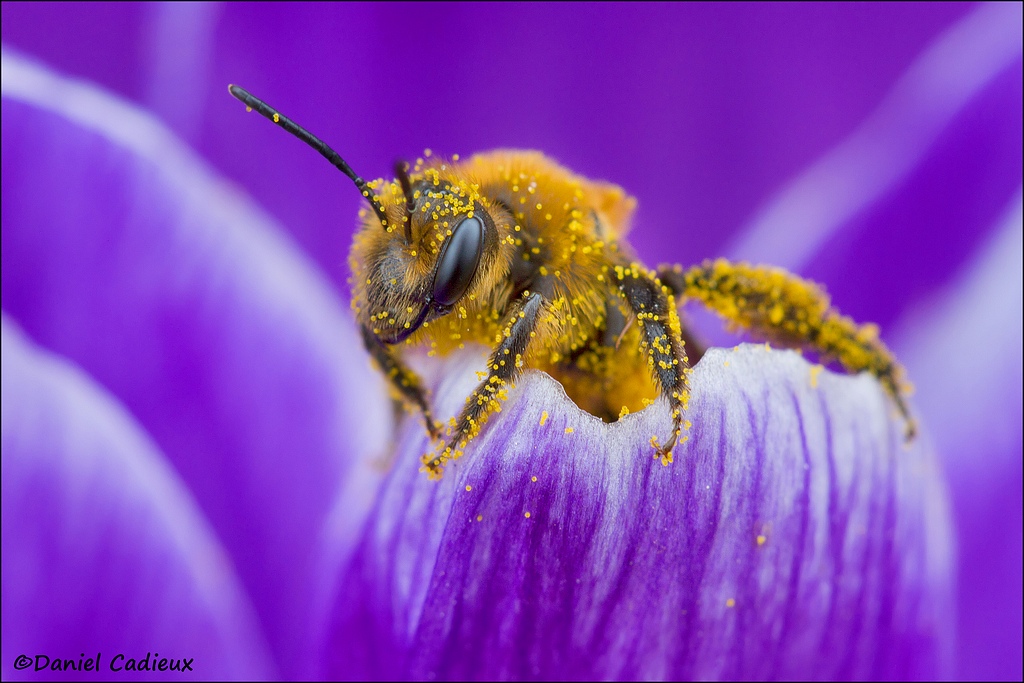