Cut It Out With Those Clipped Wings!

As one gets closer to birds for photography, one thing that is eventually inevitable is clipped wings.  Even a bird that is fully included in the frame, well composed, with lots of room all around can suddenly stretch, take-off, bank, flap, erratically change directions, or any other number of behaviours that will have it suddenly become too big in the frame and resulting in wings extending beyond the frame.

Take a look at the Black-bellied Plover image below.  When it had its wings down and simply foraging in the water, it fit comfortably within the frame.  When a gull suddenly flew just above its head, it stretched its wings out – with a good chunk of them extending beyond the top edge.  My instinct had me hit the shutter button regardless, and although it would have been neat to have the whole bird in, the resulting great view of the axillaries was well worth the instinctive pressing of that shutter. 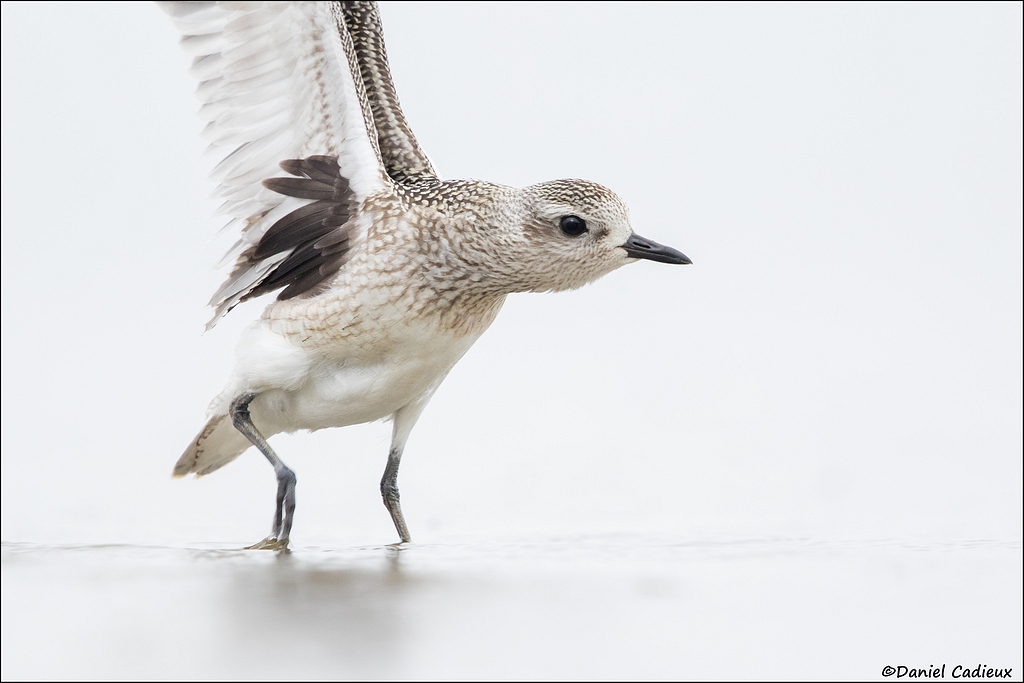 The key to a successful wing cut is to have that cut in a good spot.  Barely clipping the wingtip looks like a mistake, so does cutting a single primary or two, whereas a comfortable cut right in the thick of the wing looks a lot more deliberate.

Flight photography of larger birds, especially when they come closer, will eventually result in cut wings.  Most people will stop taking images once the subject is getting too big in the frame and wings are starting to extend beyond the frame, but I would suggest to continue “firing” until the camera physically cannot anymore, even when the owl, duck, goose, hawk, or whatever else is so close you feel like ducking!  You will be amazed at how dramatic and “in your face” the results can be if you are able to keep tracking!  Cutting the wings results in the viewer zoning in on the intense eyes and menacingly clenched talons: 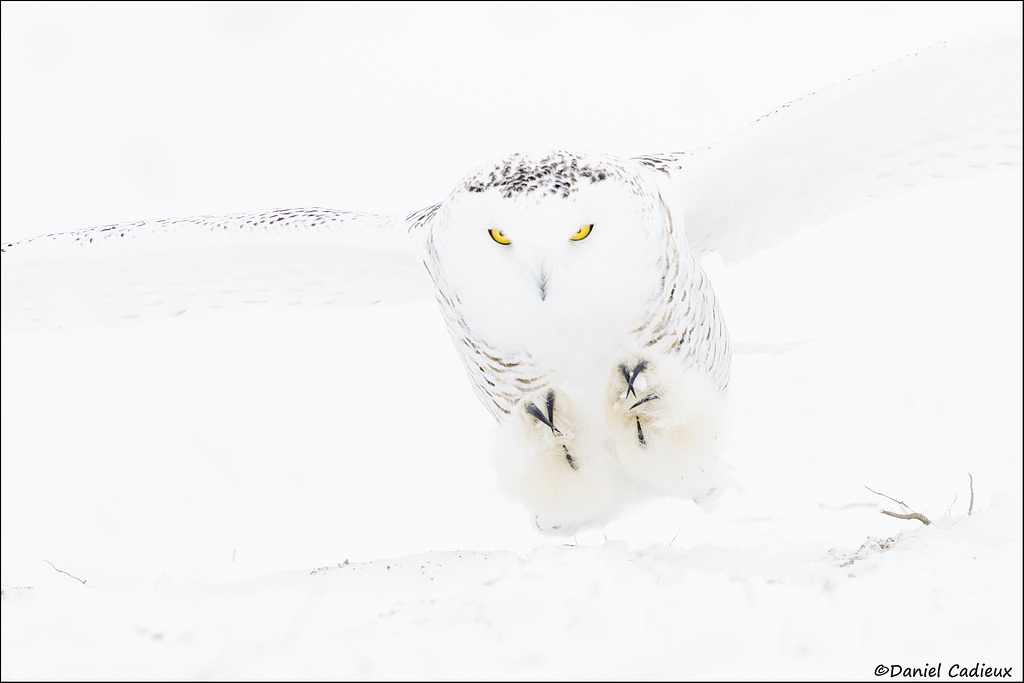 Even with a humble subject like the familiar Mallard, unique and dramatic action poses can be had when keeping the shutter button depressed as it approaches “too closely”.  I did strategically crop the image at the two side edges to ensure no single feather being barely “clipped”, plus making sure there is enough room between the last fully included feathers’ tips and the edge of the frame: 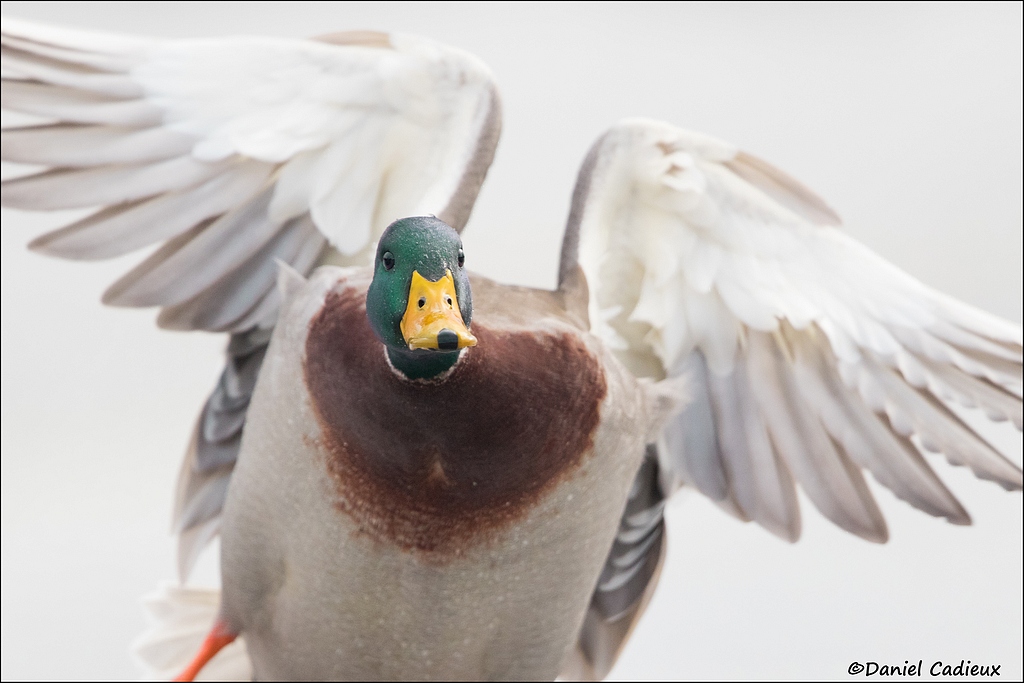 As I approached this Royal Tern, it suddenly stretched both wings upwards, solidly cutting them both out of the frame.  I could have passed up the opportunity, but taking a few images yielded me this pretty neat image of it, plus a pleasingly out-of-focus courting pair perfectly framed below one of its cut wings.  For me this is a fun close up that also coveys a sense of beach bird colony. 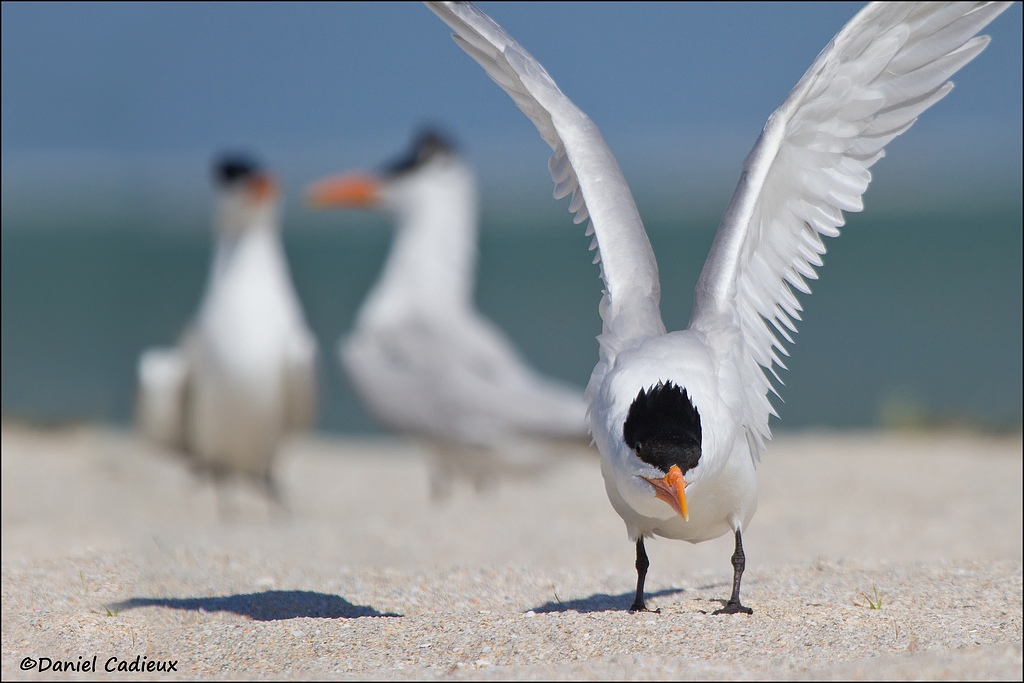 Smaller passerines will rarely give you the pleasure of cutting wings, but it can happen.  The Snow Bunting is one such small bird that loves to stretch its wings more than most other species of small birds.  While I photographed this individual for over 30 minutes as it fed on dry grass seeds, it did no such stretching.  During that time it had become accustomed to my presence and became very tolerant of me.  So I began a closer approach to go for tighter portraits.  Just as I was almost in position to do so with only the front half of its body into view, it “Murphy Lawed” me into a stretch I had been patiently waiting for before!!  Again, in such situations go for the images…it is digital after all, and no major loss if nothing comes out of it.  But you will be happy if something does materialize, such as here.  Do note that the full row of black feathers near the right edge has carefully not been clipped, and has a comfortable amount of space between the feather tips and the edge: 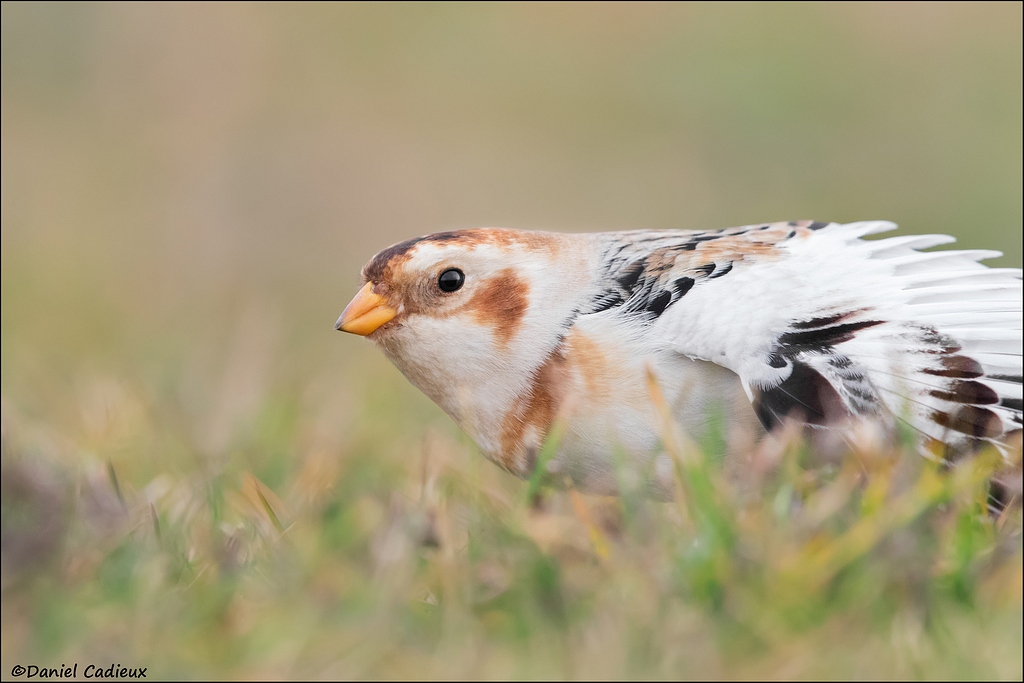 I admit in being disappointed the first few times these happened to me, but I quickly learned to embrace those close intimate views of cut-out action behaviours.  Just as a well done “small in the frame” habitat image can be a powerful image, so can a well done “too close” view of a bird in mid-action!  Do not hesitate to keep pushing the shutter button as your subject gets closer, and do take a closer look at the files before blindly sending them to the trash bin because of cut parts – some surprising treasures can, and will be found…just be certain not to barely clip feathers, but rather fully and comfortably cut the wings!