Something Fishy About This American Robin

For most of us, spending time observing or photographing nature brings us much joy and appreciation of what is happening out there within God’s amazing creation, and especially “discovering” new behaviours…such as what you will see with this American Robin that has learned the art of fishing for food.  Really?  Yes, really!

First off, what most people do not realize, especially up here, is that not all American Robins migrate south.  A good population of them remains here throughout the winter months, with an adapted diet of berries and other ripe fruit from forest and some urban trees.  Most think they are all gone as the option of foraging for worms on our home’s lawns is obviously not possible with all the snow, but many robins are around elsewhere!  Yes, really!  Here’s one that has been hanging around close to my place in an open stream – looking and finding small invertebrates in the “micro-climate” created by a man-made water run-off stream, and supplementing this with nearby berries. (click to enlarge photo, than click on your browser’s “back button” to resume reading): 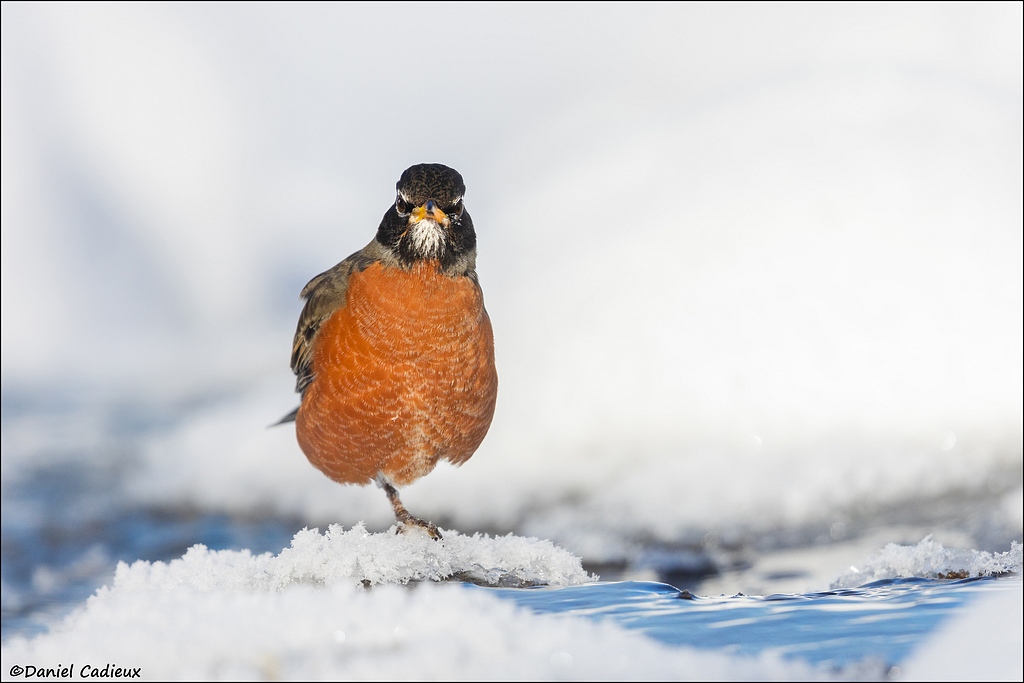 On the other hand, a few of its cousins across town have been having it easier.  A small pond in a treed area has shrunk more and more as winter progresses, and trapped within that pond are thousands of minnows – mostly golden shiners.  These have been concentrating in very tightly packed groups just underneath the water surface of the little bit of open water left.  On some of the colder days the open water is just a few inches wide.  The robins have figured out that these are easy pickings and have adapted their strategy by coming in to the open water, and plucking these minnows right out of the water, à-la-heron: 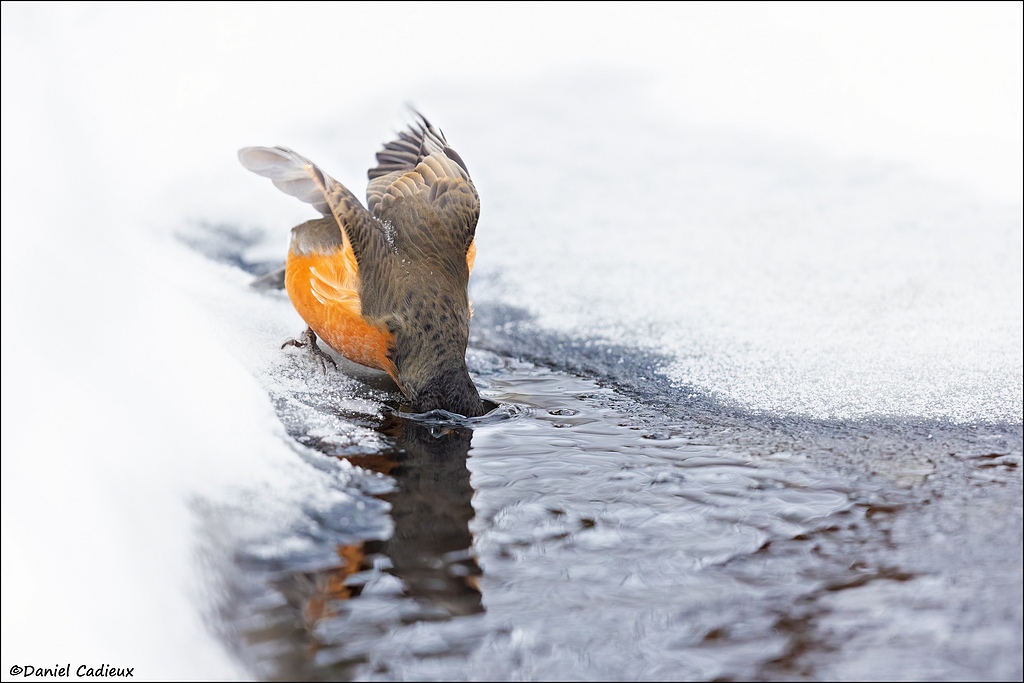 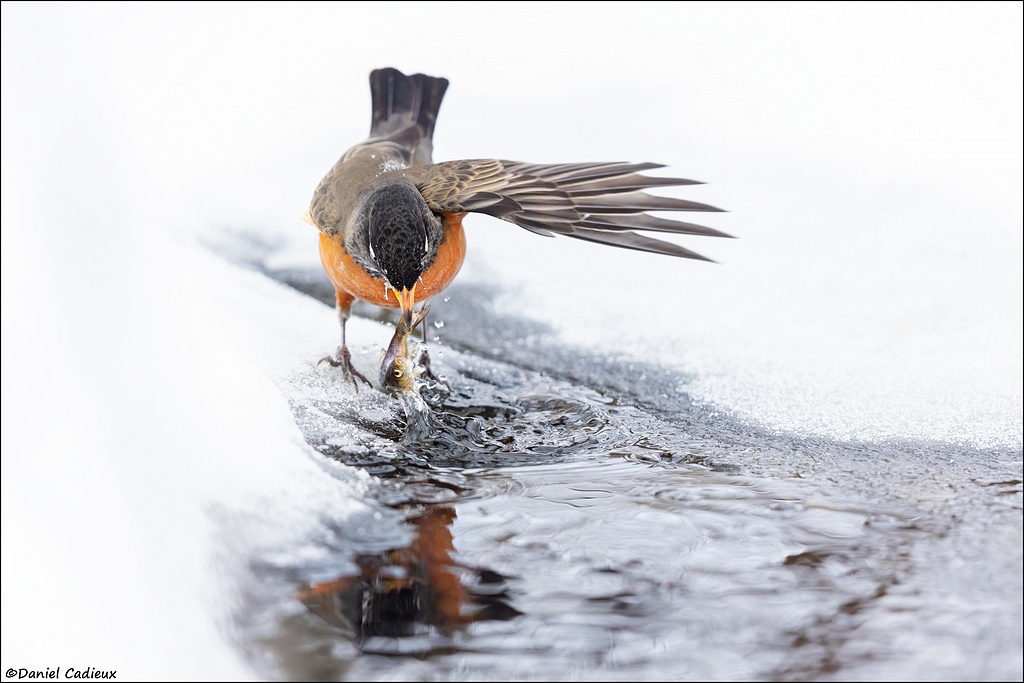 There was one robin in particular that was the “pond bully”, and anytime another robin came in close it proceeded to chase it off.  There were perhaps a dozen other individuals in this general area.  While observing the fishing behaviour, I noticed it was always the very same individual that was able to come right down to the water and pluck fish out to consume.  Sometimes two or three minnows before it perched nearby to rest and digest.

Another interesting thing I observed (but did not photograph) is that the robin did regurgitate a couple of pellets of undigestible bits, the same way owls (and other birds such as some shorebirds) do.  First time I’ve seen this in a songbird. 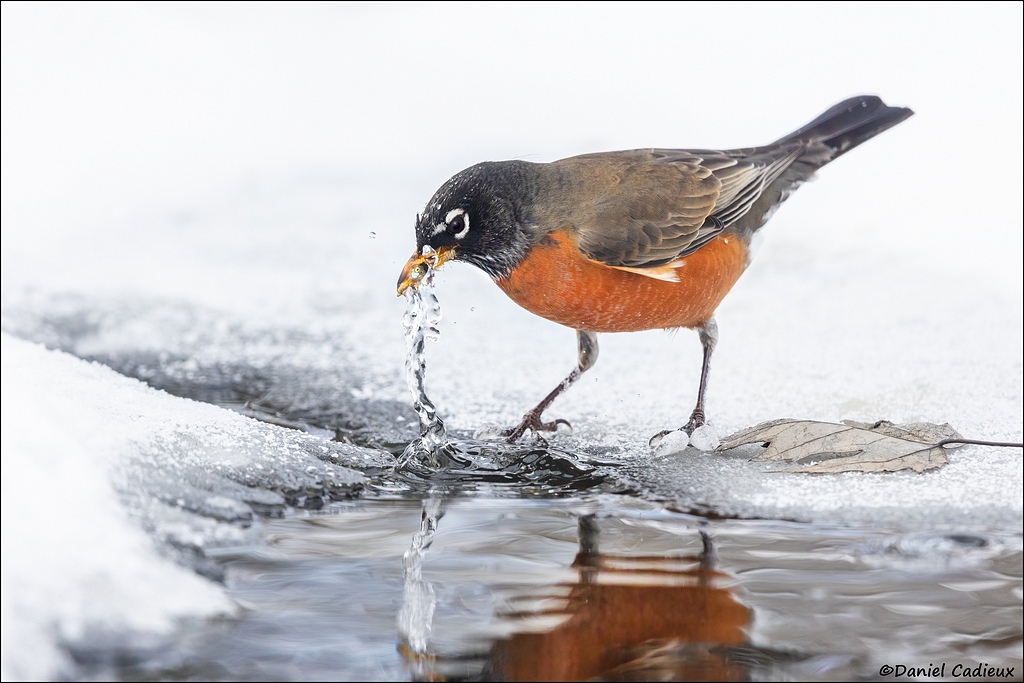 After consuming a few fish, it would often go into the surrounding buckthorns to join the other robins eating ripe berries.  Dessert I suppose. 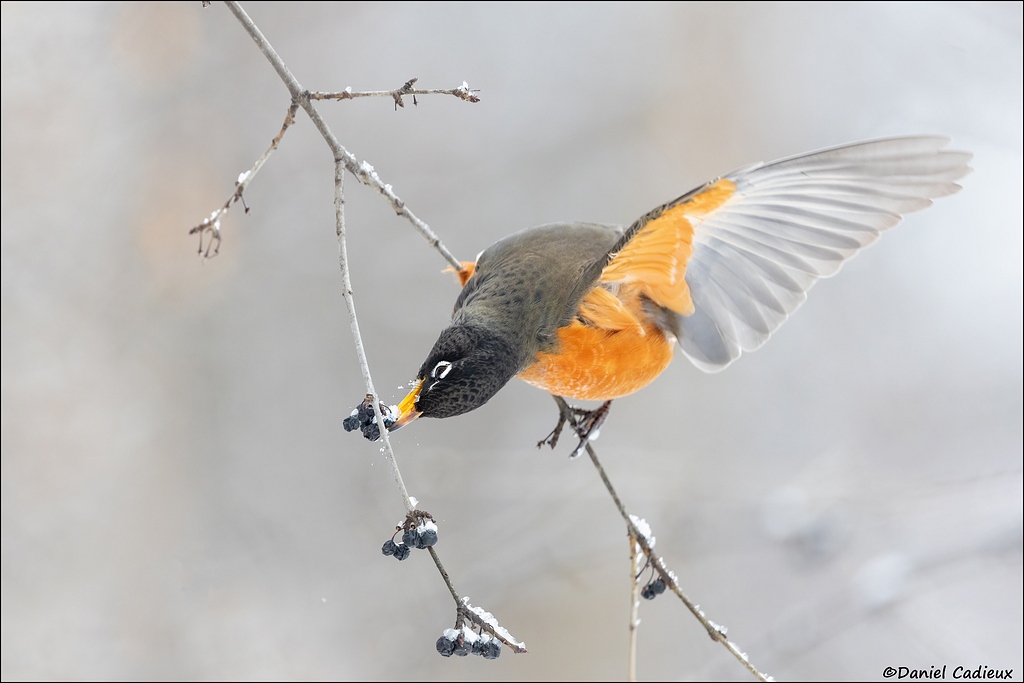 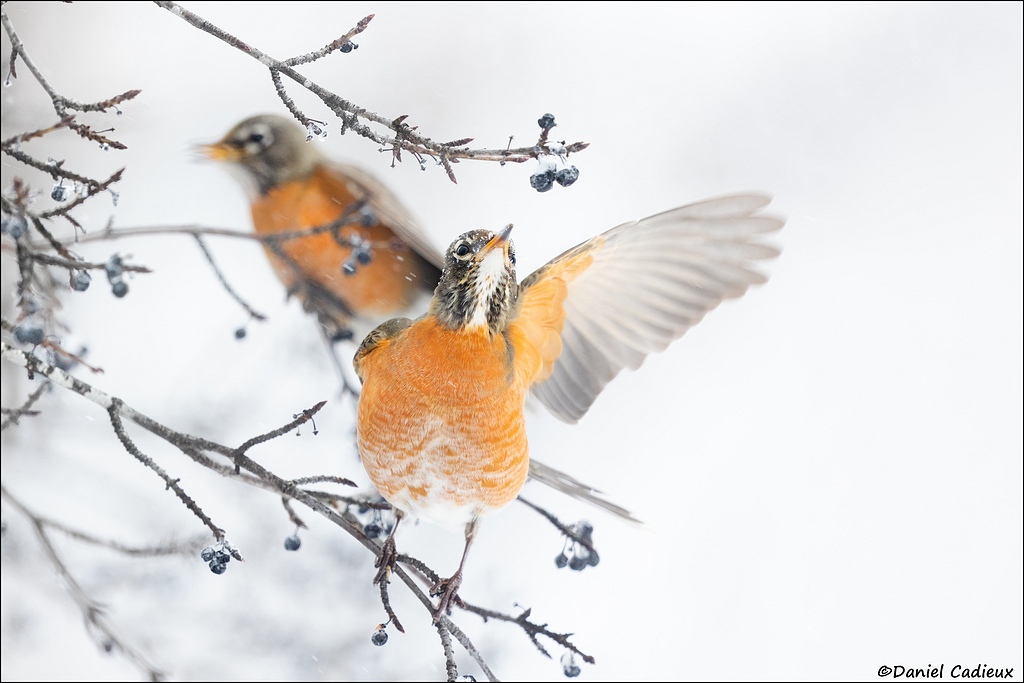 Now back to fish.  One thing that the robin would do immediately after grabbing a fish, usually by its tail, is to lay it down on the snow, and sorta peck at it, in a manner that would suggest that it was wondering what to do with it.  But in reality, all it was trying to achieve is to align the fish to swallow it head-first.  Such an instinctive move – these guys are not known to eat fish, and yet it knew to align them head first, just like other fish-eating species do!  Learned behaviour, or pre-programmed in their genes? 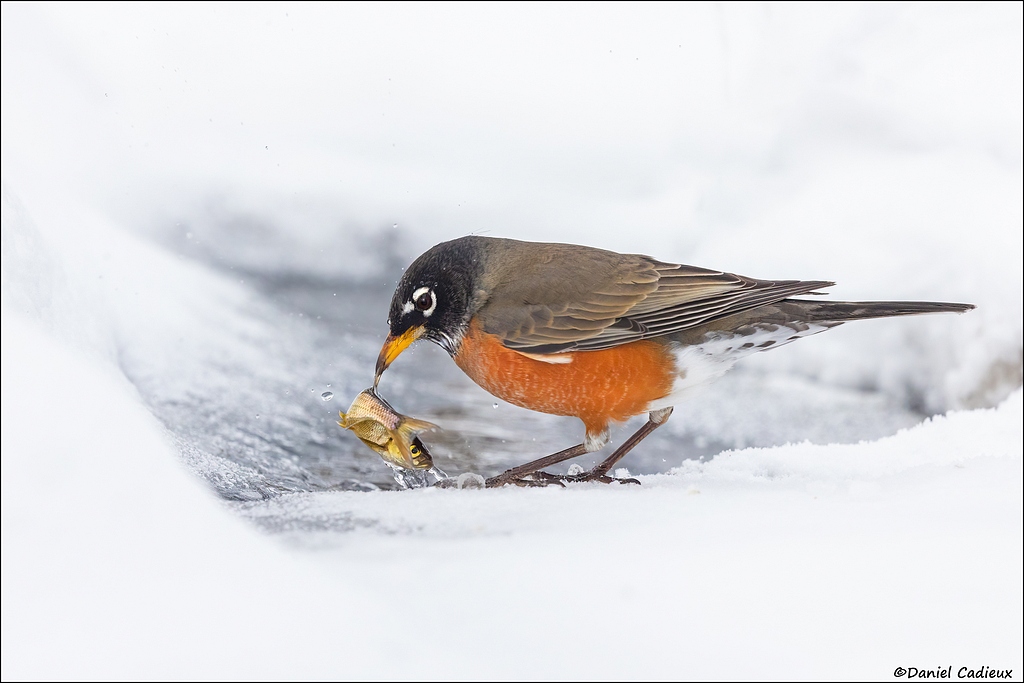 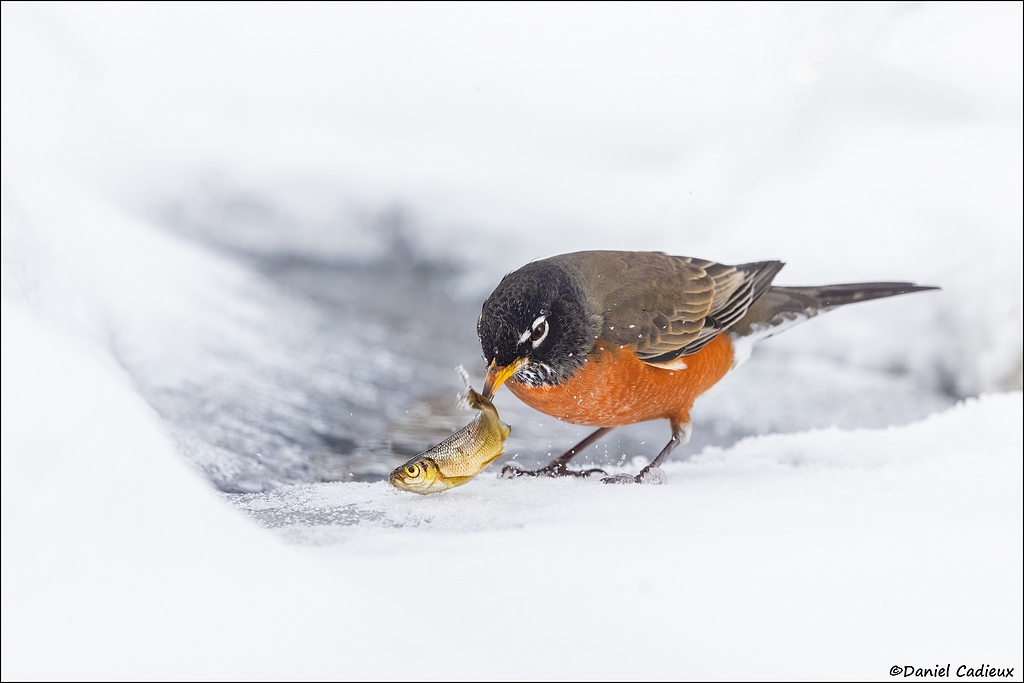 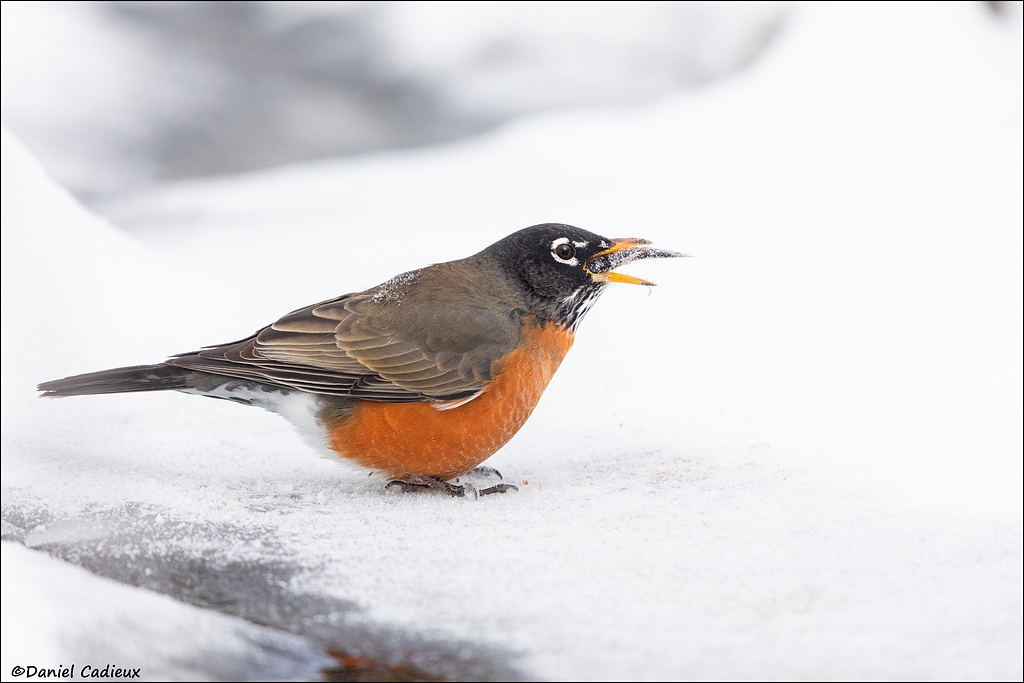 This a behaviour I first observed and photographed in 2011, and although it was new to me then, it was already a known thing…albeit not common, and certainly not well photographed.  Even my images back then, although not bad per say, were not up to my admittedly tough standards.  I then saw this again in 2015, but no photo ops at all.  Then fast-forward to this winter in 2022, and bingo!  Great opportunities that I can finally be very happy with.  And also a coincidence (or not) about these three different years I’ve seen this?  All at the exact same spot.  So this tells me to keep my eyes peeled for future opportunities as the robins learn to cope from staying behind during the sometimes brutal winter months.  Until those future times, here’s a parting image of a well-fed and satisfied American Robin hanging out during a snowfall, perched right above the minnow-filled open water.  Another round soon?….. 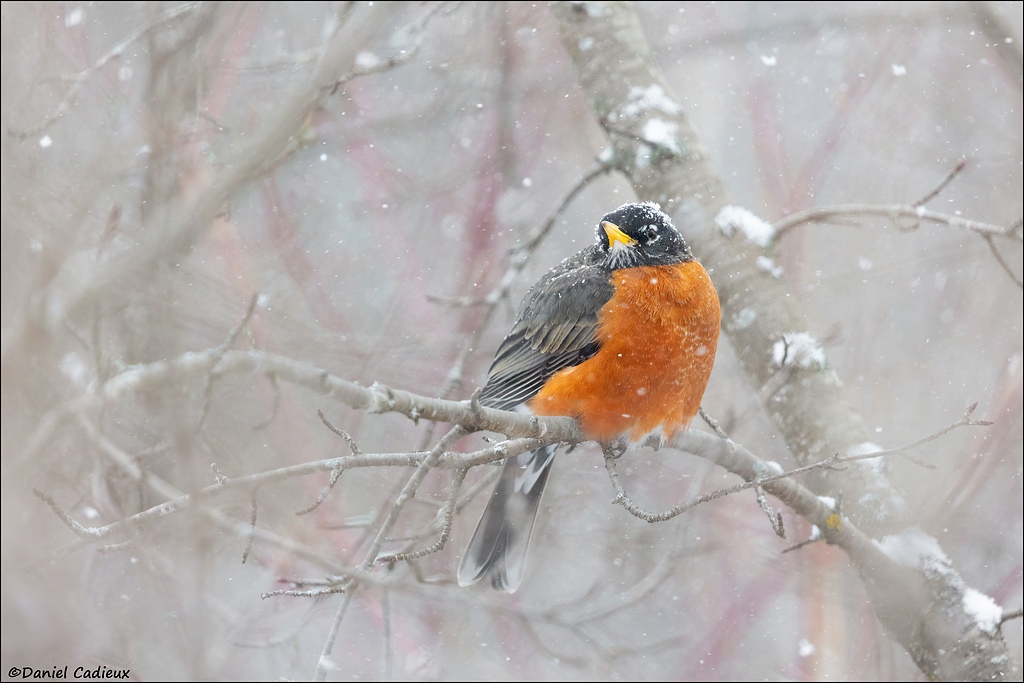