Back by popular demand, after skipping last year, is my top 10 list of this year.  Again, it was an exciting year for bird and wildlife photography locally.  I count myself blessed with such a diversity of habitats and subjects, and during all four seasons!  And again, it was tough but fun to go through my 2021 files to select but 10 images.  As usual, click on the images to see a larger version.  Without further ado, let’s get going!

Probably my favorite Bobolink image.  And one of my favorite species so I may be biased in including what is essentially “just a bird portrait”.  Such a fun bird, with one of the greatest songs in the bird world!  These guys are in the blackbird family, but with a twist…just check out the dorsal side.  This fella was on a fence post when I first came across it while driving slowly along country roads, and when I made my approach (still from sitting in my car), it spooked off the fence post and onto this dry flower, dorsal side towards me.  Whoa!  Even better! 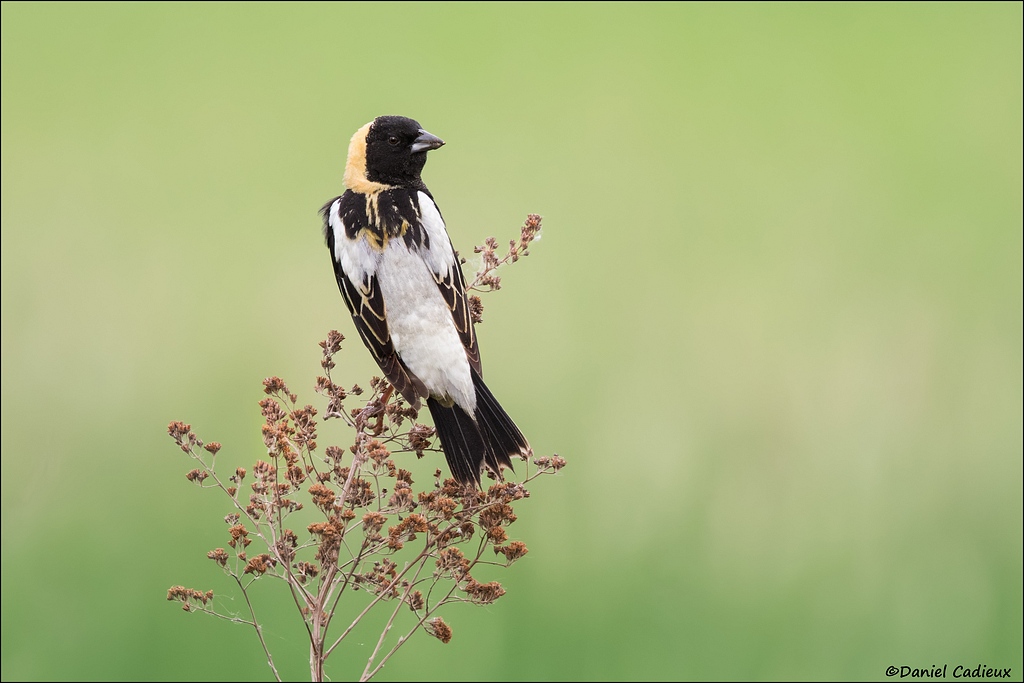 During the colder months I’m always on the lookout for ice formations and other ice macro patterns.  So much to see!  This was a particularly windy day, and the cold open water was being blown onto nearby branches – and blown into arcs by the strong winds as the water was accumulating and freezing with each passing splashing wave.  With the longest “claw” perhaps a full foot long, this is not a true macro image, and was actually photographed at 700mms (500mm f/4 lens plus 1.4x converter).  Just as well, as I was standing well back and avoiding being splashed by freezing water myself. 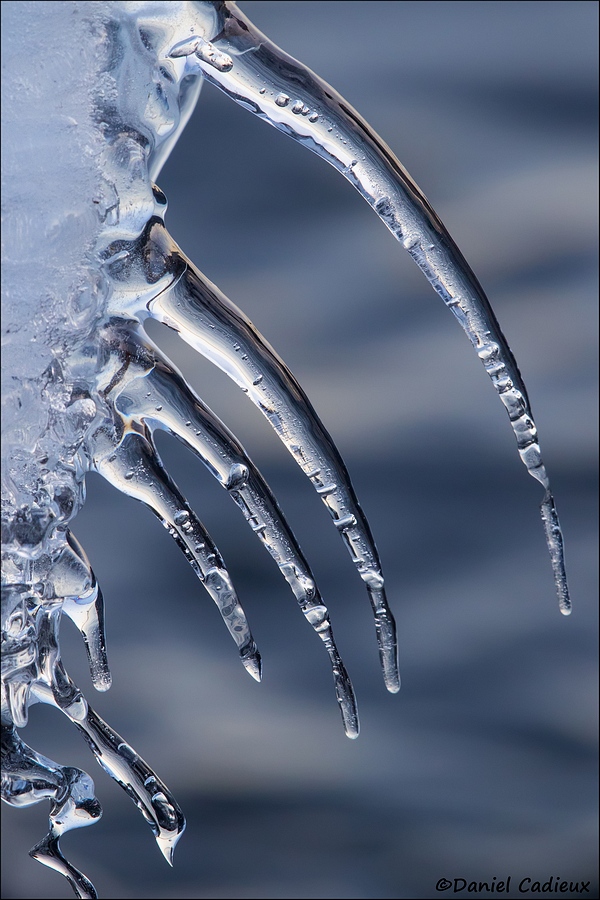 8. Eastern Chipmunk And The Last Berry

This one is so new that it almost did not make it in time for the list, but became an instant favorite as soon as I saw it on my computer screen!  I spent about an hour photographing this little guy as it made its way along the thin branches of a crabapple tree, in search of fruit to bring back to its burrow.  With such cold temperatures and snow on the ground I was surprise to see it so busy, rather than hidden away in its burrow until the spring.  It goes to show you, fun opportunities with the most common of subjects are just as rewarding as with other less common ones. 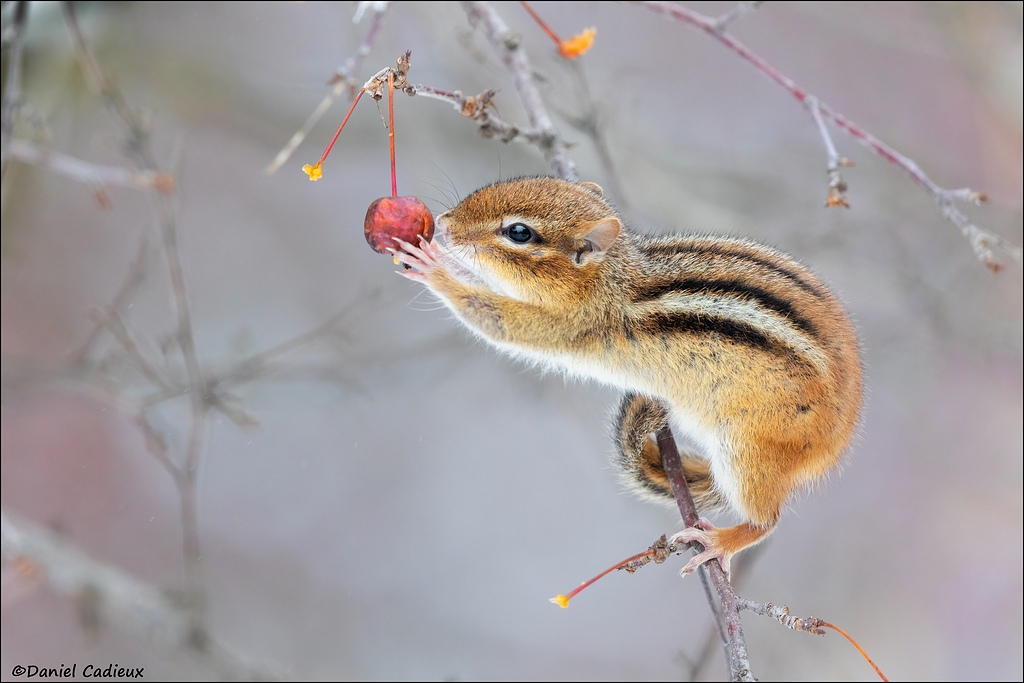 An image created way past my normal time, thanks to a very hazy day caused by distant forest fires’ smoke having made its way to our area and making everything look much “yellower” than usual, thus reducing the harshness of the sun.  At the same time, bright enough to cause this “see-through” effect on a Great Egret flying directly above me.  When the egret was further away I was not thinking to photograph it, but as it came much closer I could see the x-Ray effect on the wings with my naked eye, so I then immediately pointed my lens up just in case.  I managed three images, two of them with the subject badly cut at the frame edges, and this one that was just perfect to process!  I’m glad I did point my lens to it… 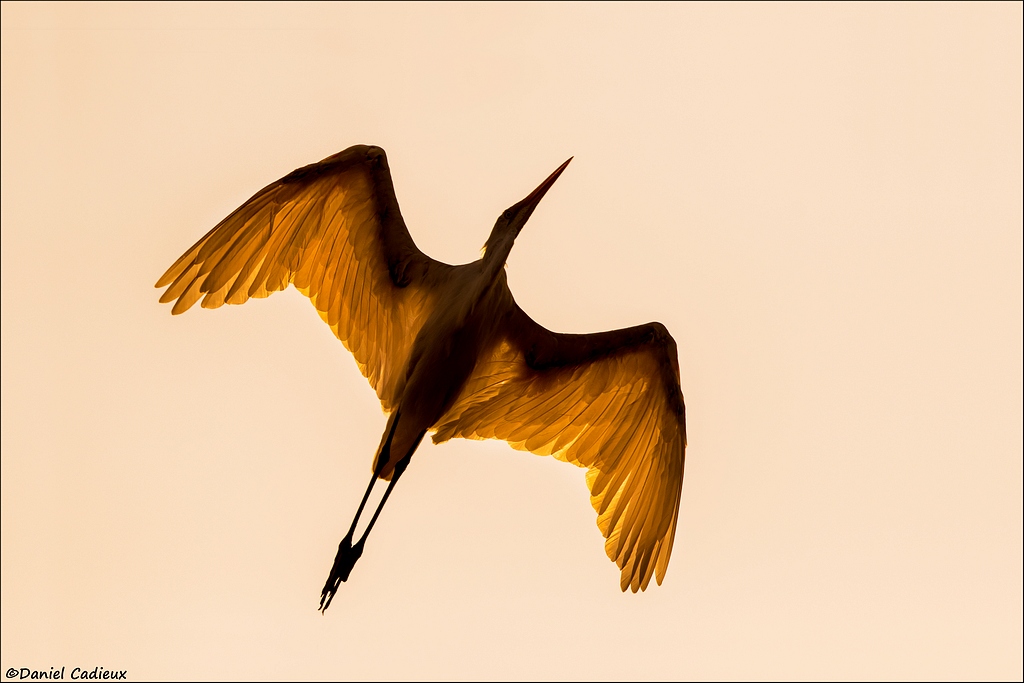 The Common Loon was my “spark” bird a long time ago, so when a friend asked me if I wanted to go out on a loon-with-chicks photography session on his newly-acquired boat it did not take long to say yes.  A great morning was had, and yes, many images of loon parents feeding their young chicks…but in the end this backlit image of an adult loon turned out to be my favorite.  Thanks a stack Marc!  By the way if you are looking for a fun, dynamic, and very talented photography workshop leader for bears, owls, or loons…do take a peak at Marc’s website https://www.wingstretch.com/ to reserve your place! 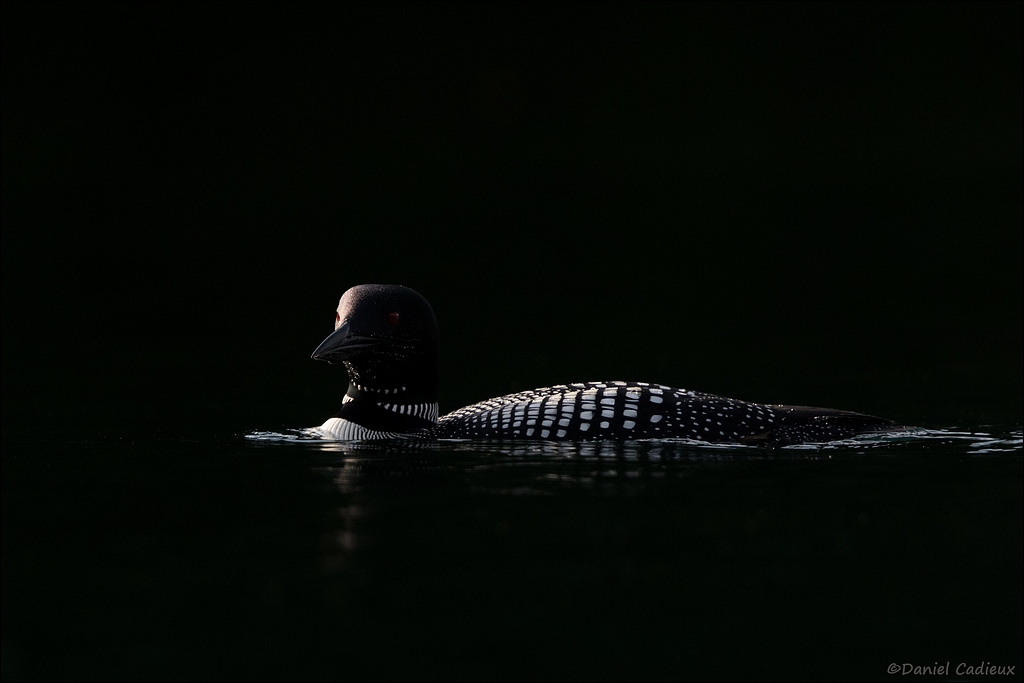 Every year the locals hope for grosbeaks to irrupt into our region for the winter months.  Either Pine, Evening, or both.  Well, we had both during the last winter!  Tons of photos of these photogenic species, and for sure at least one had to make it onto this year’s list.  Pine Grosbeaks are rather tolerant of human presence, and with careful approach you may come within petting distance to them, so when you encounter a flock of 10-20 or more birds invading a favorite fruit tree it’s only a matter of placing yourself in position where you think the best spot for beautiful photos will be.  Usually at the outer edges of the tree such as here.  The festive winter mood to this one made it a favorite of mine. 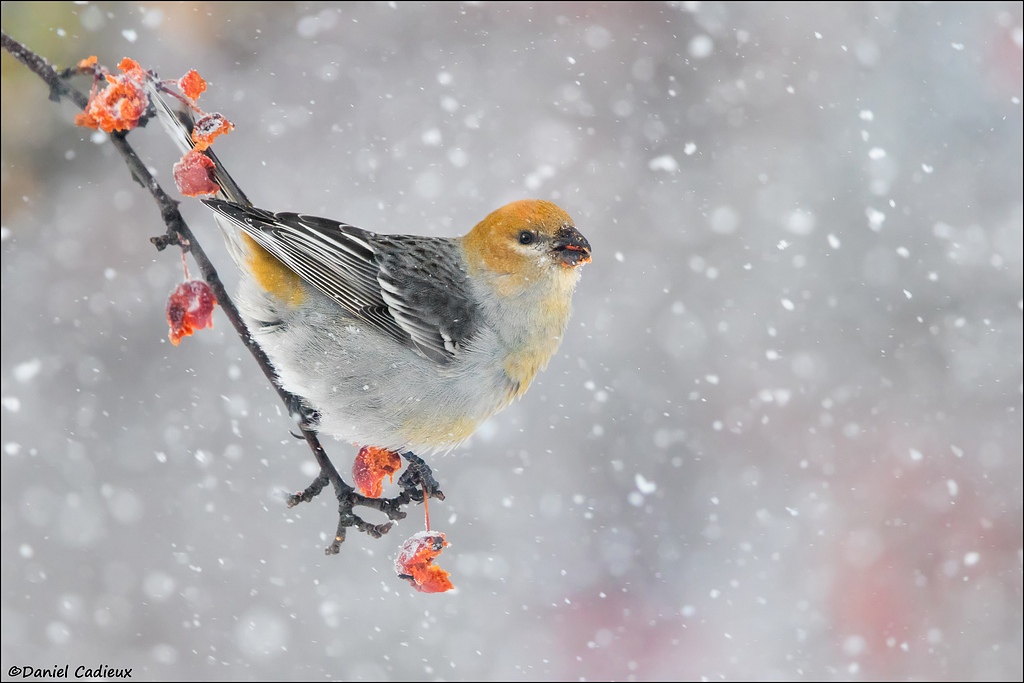 The third image in this year’s list that is backlit…there is just something about playing with the light.  Where this American Coot was feeding I was limited to only backlit situations in stronger light than I prefer, but when I noticed the neat effect of the splashing action against the sun when it dove for vegetation I thought I’d try to see what I could come up with.  If nothing else it would be fun just to pass the time and at least get the creative juices flowing.  When I go this one and looked at the camera’s LCD I immediately knew I had something fun and unique…not to mention looking a lot like a bull moose emerging from the water! 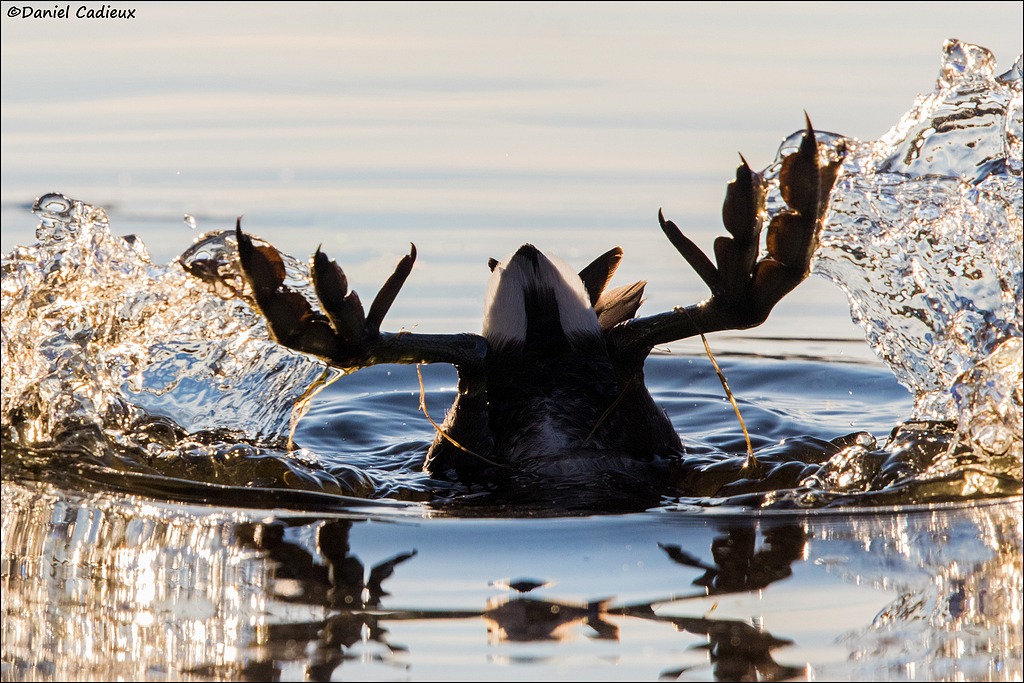 3. A Trio Of Baird’s Sandpipers

Shorebirds are my absolute favorite family of birds, so it’s no surprise to see one come up high on my list.  Baird’s Sandpiper, although not super rare, is considered uncommon here and attracts some attention from birders and photographers alike.  When one is presented with three of them, all with good head angles and with near-perfect juxtaposition and separation, at point-blank range, well that is a good day!  Admittedly this was, from a standing perspective, an ugly patch of beach, but when lying down flat on the ground things got rendered out-of-focus beautifully. 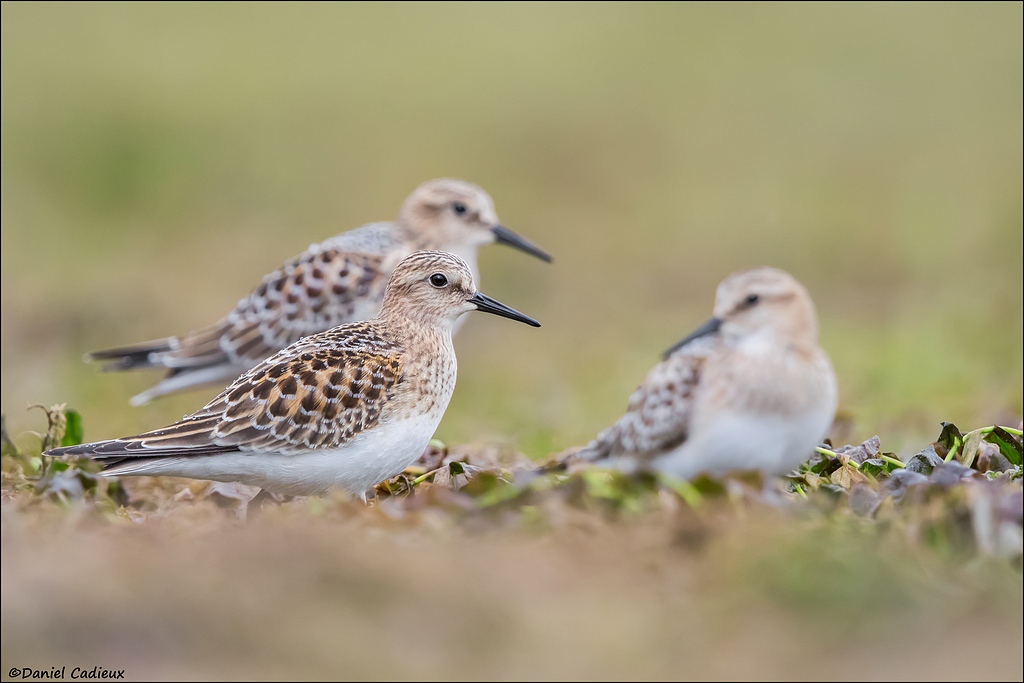 2. Not For The Faint Of Heart – Great Blue Heron With Rabbit Catch

This was both my most and least popular image of 2021.  I’ve never had so many messages in regards to one image than of this one.  Most praising it, and many others not liking it – not due to the technical merits of it, but rather of its graphic nature.  I can sympathize as no one likes to see an innocent animal suffer, especially not cute ones (replace the rabbit with a fish or insect, and not as many will find it gruesome).  This is thankfully probably the least graphic of the sequence I got of this stunning scene I came across that rainy morning.  I will not go into detail in what I heard and saw, except that apart from the apparent fear for its life the rabbit did not suffer much.  All I do know is this is nature at its rawest, and a moment etched permanently in my brain. 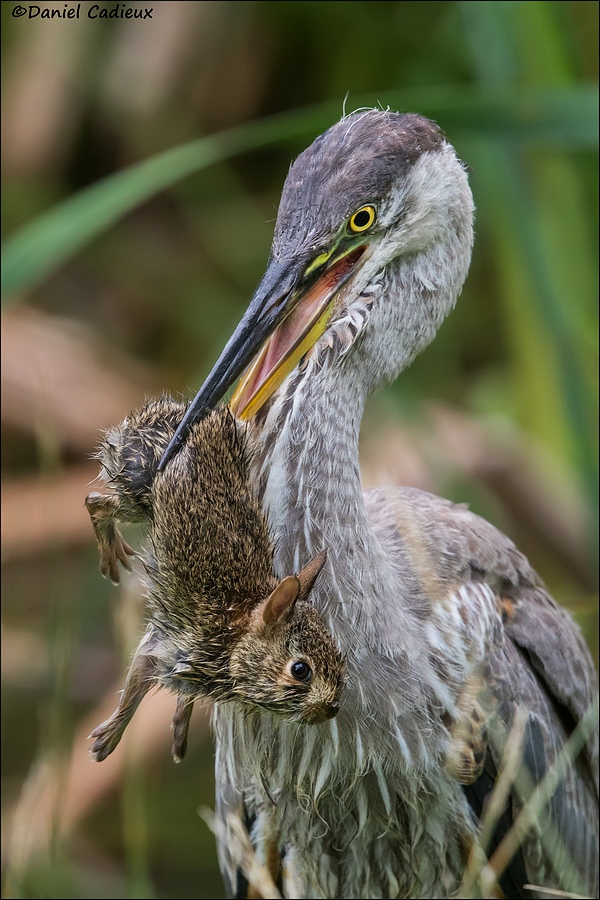 After that gruesome #2, let’s finish it off with something a little cuter!  I had the huge privilege in following a Red Fox den a mere 2 minutes from my house.  I spent many mornings and a few evenings watching the antics as they grew up from little curious kits to bigger playful “teens”, and then their dispersal once old enough.  This frame was from one of the first outings that I was watching them, and the kit on the bottom had spotted me and came closer to investigate.  Then another came rumbling over and stood on its sibling’s back for a better of view as well!  This lasted about 2 seconds, and I was sure glad I had my attention on them as there were another 5 little guys running around the place.  Quite a busy mother fox!  I am hoping for a return to the den next spring, but heavy construction all around the site has me thinking this will not happen. 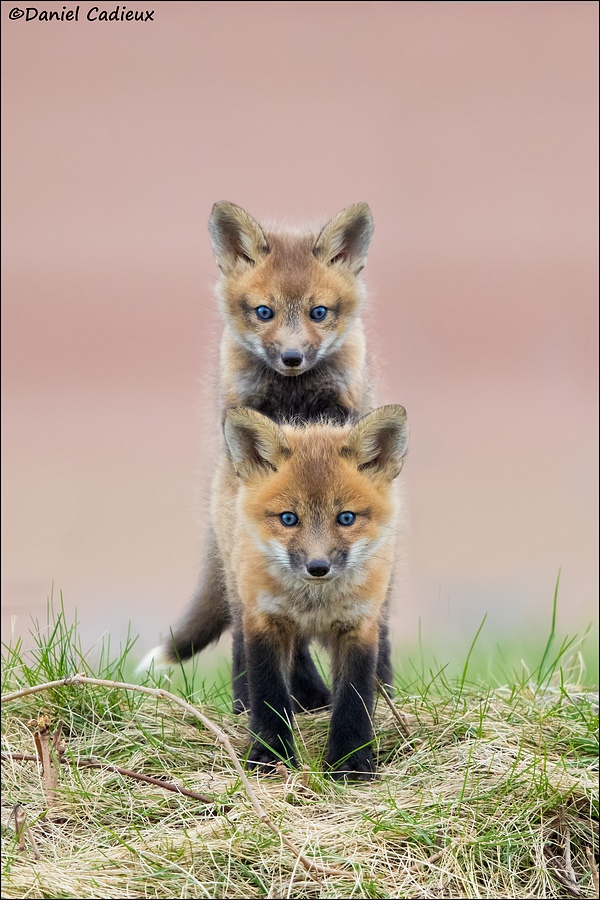 So there we have it….which of these is YOUR favorite?  Do you agree with the order?  Feel free to leave a comment in the comment box below!